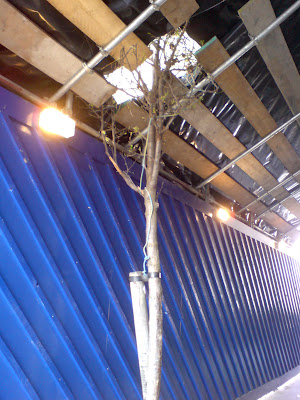 amazingly new leaves have started to grow on the tree under the bridge on brick lane. the tree is still tied up and now has scaffolding above it with a builders 'pallet' sand bag over the top of the tree in a scaffolders effort to protect the tree. this section of brick lane has been closed off for around a year now for the ongoing works on the east london line extension. i've watched other bridges constructed along the same route (New Inn Yard & Holywell Lane) that have been finished and opened up to the public only to be closed, knocked down and remade weeks later -does anyone working on the project know whats going on? from a public point of view, major mistakes have been made.
Posted by Rupert Blanchard at 23:30