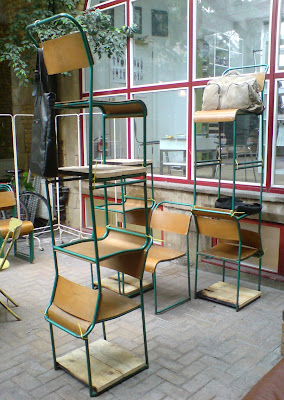 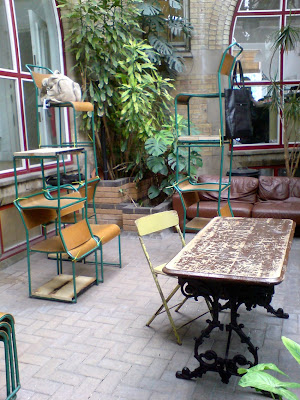 Some work in progress images for an Ally Capellino exhibition stand to be used during Paris Fashion Week 2009. The brief was to keep it really very simple, easy to erect and easy to transport to Paris. After Ally and Michelle (of Ally Capellino) visited my warehouse, many ideas were discussed but a really simple idea was hatched using my collection of Pel stacking chairs as a modular construction material- ideal for transport as the chairs stack together very tightly, along with a small packet of plastic cable ties to fix the chair frame structures together. A selection of interchangeable wooden 'shelf' sections were made to lock into place on the chair frame columns to provide different levels creating a flexible system as the precise exhibition stand size and layout was as yet unconfirmed. Products are to be placed on and hung off the structures. Two further pieces of vintage furniture; a table and screen wall are also to be used in the layout. The Pel chairs used in the structure were made in England in the 1930s and spent most of there time to date in a village hall in Scotland so it's rather exciting to think that they are going to have a little holiday to Paris. These 'work in progress' mobile phone pictures are taken as Allys' studio space.
Posted by Rupert Blanchard at 22:46