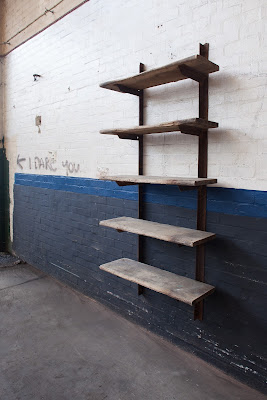 Above and Below:
Dead Man's Shelves 2017. Bed frame angle iron and basement stair treads.
The story of how & why follows below... 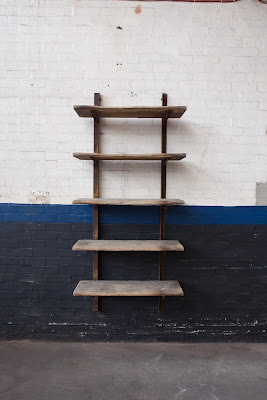 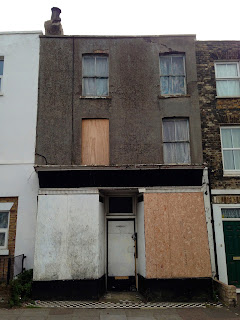 Many years ago, while on holiday wandering the streets of Margate, nosing around the boarded up properties, I stopped at one that caught my eye. Reading a tiny sign in the recessed doorway a voice from inside said something like 'go away'; realising the property was occupied I moved on.
Fast forward several years later, now living in Margate, I ventured out to the supermarket on a wet evening and found the property cordoned off with rumours of the structure collapsing internally. The property was secured by the local council and later sold off at public auction.
I discovered more about the property and its occupier. Years of decay and disrepair had taken its toll on the roof structure and internal floor joists which had rotted out of the walls. The weight of the occupier's many 'collections' and the heavy rainfall resulted in the floors giving way, collapsing internally. The occupier sadly died in the basement. 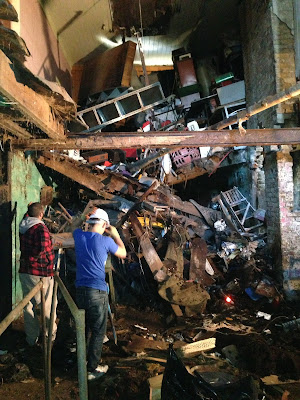 Above: I took this picture in the basement looking up towards the ground floor two weeks after the new owner had started clearing out the life time of hoarding. In the new owner's rush to clear the space I tried to salvage whatever I could as although I didn't know the original owner, I didn't want his life time of hoarding to end up in landfill. Places like this serve as a permanent reminder to myself to make sure I don't end up going like this. I wanted to save something from the space, but without hoarding any of it; to make something useful, or something I could pass onto someone else. 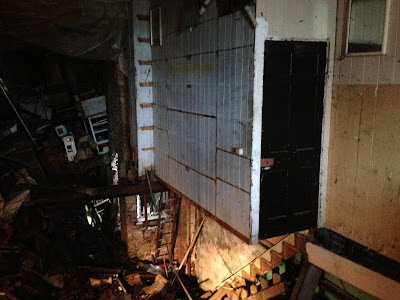 I discovered a small hole towards the rear of the building with a ladder and a network of ropes where it is said that the original owner entered the property by pulling himself over the top of his hoard. His last steps into the basement can be seen in the picture; the door and wall to the basement are dangerously hanging from the ceiling above.
I salvaged items of no obvious value; the well worn stair treads marking every footstep into the basement and a number of rusty bed frames found stacked in one corner of the basement. Hoarders often save odd parts of bed frames believing the angle iron to become useful one day. Raw materials are often saved by people who have lived through a time where the availability of such materials was limited. My own (pre & post-war) basement is built partly with bed frame angle iron.
I also saved the red plastic letter R seen below, this came from the shop sign during the 60s/70s. You may recognise it as my user thumbnail picture on Twitter. 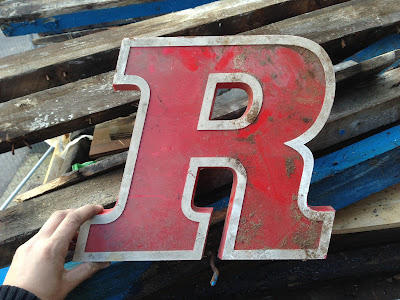 Below:
The simple wall mounted shelving unit. A testament to hoarding.
Rusty steel angle iron and worn pine stair treads, nothing else. 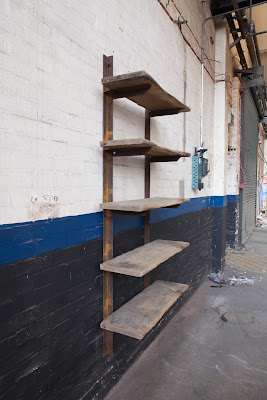 Posted by Rupert Blanchard at 13:18