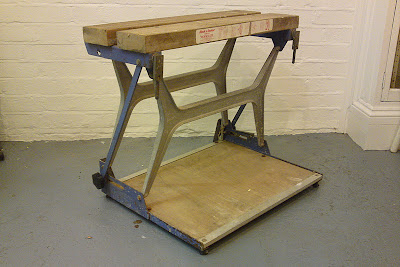 Regular visitors to my blog will know that i am a big fan of everyday design and a bit of a workmate nerd. This morning at 5.30am in the cold and dark at a car boot sale i found the holy grail of all workmates for less than the price of a bacon sandwich. Although i have over 20 workmates in my collection this is the first ever Mk1... 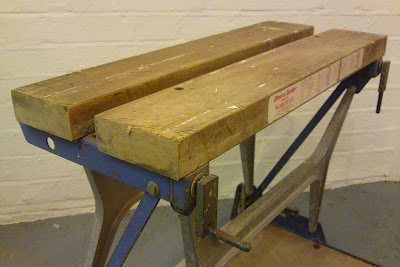 ...very thick 2inch solid beech vice with interesting folding handles that don't appear on any of the later models as they can be rather hard to use. the instruction sticker on the wood states 'made exclusively for Black and Decker by Mate Tools' so it must date from the early 1970s. 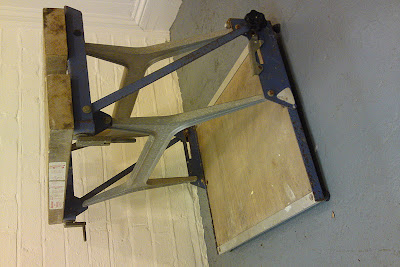 Above: the triangular mark towards the base is the 'as selected for the Design Centre London' sticker.
the overall height is surprisingly low but this is explained partly by the original design intention that the workmate was to replace the use of a dining chair as an ad-hock saw horse. i wonder if this might be part of the attraction of the workmate to me as i am a huge chair design fan and actively deter the misuse of chairs - chairs are not ladders people!
Below: cast aluminium frame with 'mate tool limited' makers mark 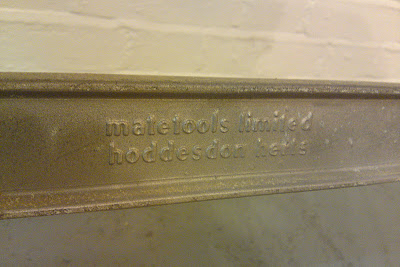 see more workmates here
A background text from www.ingenious.org.uk :
South African Ronald Price Hickman was a design engineer working for Lotus, the sports car manufacturer. He was also a keen DIYer. The idea for his invention of the famous ‘Workmate’ workbench-cum-vice-cum-sawhorse came to him after he cut up a large piece of plywood, in a cramped space, using a Windsor chair for support. When he finished sawing he realised with irritation that he had damaged the chair beneath. So he set about designing, for his own use, a compact foldable and portable bench, which could be set up anywhere and taken easily from room to room. The work surface comprised two 27-inch lengths of 5-inch x 2-inch beechwood, one of which could be moved as a giant vice jaw against the other, to grip large or irregular-shaped objects. The two lengths of beechwood were mounted on a lightweight aluminium alloy and steel frame, with a footboard at the base. The user could stand on this to give rigidity and stability to the structure. The work surface could even be used as a seat while planing, and power tools and extra vices could be mounted on the jaws and work clamped to them. When not in use the workbench could be folded up to suitcase size and hung on a wall.Hickman believed he had created something that every DIYer would want, so he showed it to the tool manufacturers. His earliest design, dating from 1967, was turned down by Black & Decker. After failing to interest a further seven companies, Hickman wisely patented his idea and decided to manufacture the bench himself in 1968, trading as Mate Tools Ltd, in the old brewery building in Brewery Lane, Hoddesdon, in Hertfordshire. Over the next four years about 25,000 units were made and sold. Then, in 1972, Black & Decker came back to Hickman, who granted them a licence to the production rights of a new design, the Mark II Workmate, for which they took over manufacture in the UK. Black & Decker finally started production in the US in 1975, after a great struggle to convince the parent company of its potential. The rest, as they say, is history. Over sixty million Workmates have been sold around the world.
Posted by Rupert Blanchard at 15:01